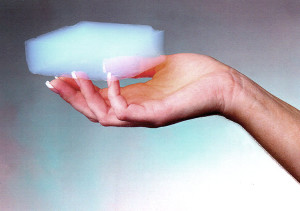 Aerogel is a fantastic material that is strong as steel and light as air. (Its weight is only 3 times heavier than air.)

It is a synthetic material derived from a gel. Sometimes it is called as “frozen smoke”. Despite its name, it is a rigid material.

Aerogels are very good thermal insulators. Generally they are made of silica. However there are some different substances used as the rigid part.

Aerogel is a futuristic material. However its invention was made in 1931 by Dr Samuel Kistler at the College of the Pacific in California.

Aerogel is used in some products such as:

By using some nano-technological production techniques, aerogel can be an important material candidate in our future products.

New style smartphones One of the new style smart phones is "handsfree/earsfree" Nokia FIT. It is a concept designed by...